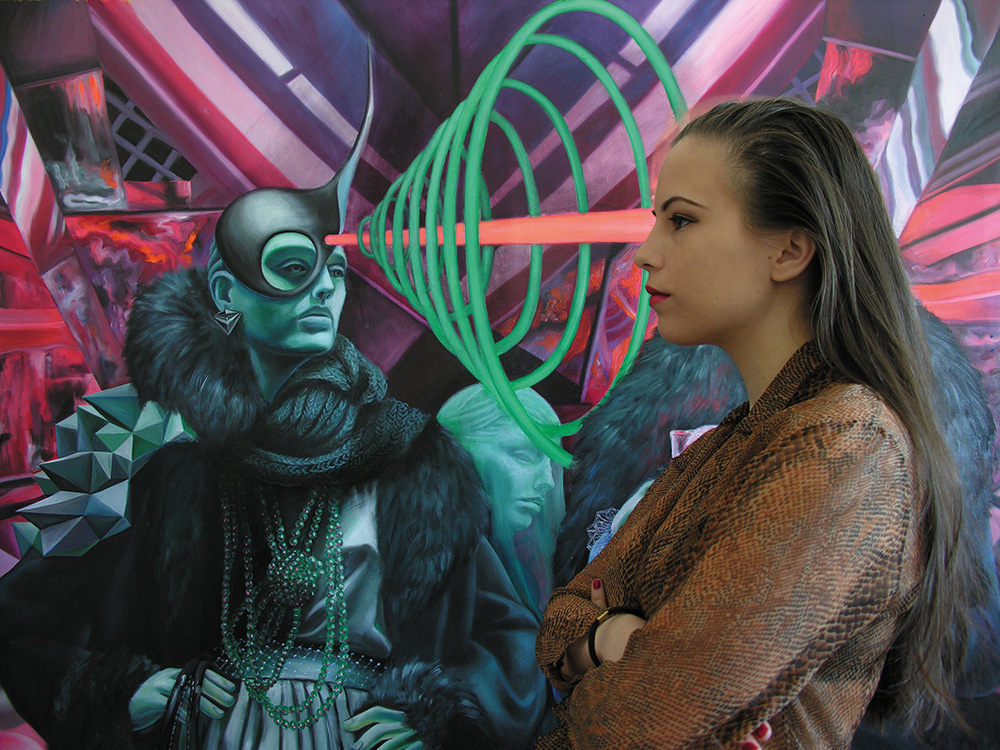 I discovered the true purpose and meaning of my life in 2002 while I was studying at the International Summer Academy of Fine Arts in Salzburg. I was attending the course entitled Wearable which was led by Prof. Caroline Broadhead from London. I decided there to become an artist.

I was 17 when in 2004 I started my studies at the Academy of Fine Arts in Vienna in the class of the professors Adi Rosenblum and Markus Muntean. The class was called contextual painting and was taken over by Elke Krystufek in 2005 and by Ashly Hans Scheirl in 2006. I graduated in 2008. Starting from 2011 I studied graphic at the University of Applied Arts in Vienna. The class was headed by Prof. Oliver Kartak. I graduated at the University of Applied Arts and obtained my second degree in 2015. In the meantime, from 2006 to 2010 I also studied architecture at the Vienna University of Technology. During summer I have returned twice to Salzburg to visit courses led by the professors Rivka Rinn and Andrea Fogli at the International Summer Academy of Fine Arts. I work most of the time as a painter, but I have numerous finished graphic design projects and I have been involved in several film productions with 3D digital animations.

The four pillars of my experience are the three universities I have attended and my own artistic practice. The artistic freedom granted to students at the Academy of Fine Arts remains the guiding principle for me forever. I let free rein to my imagination. I choose my subjects and my artistic means of expression according to my current interests. But it doesn’t mean that my thoughts jump back and forth arbitrarily. I work efficiently and task-oriented, as I learned at the University of Applied Arts in Vienna. Studying at the Technical University in Vienna taught me that I should constantly develop myself. I strive to continuously refine my painting technic. I carefully observe the current art discourse and always try to expand my theoretical knowledge. Ultimately, my own artistic practice showed me how important it is to know the driving forces that move the art market. It is a difficult balancing act to be commercially successful and at the same time to create and leave behind an oeuvre, the intellectual and artistic value of which grows in the future proportionally with the distance in time from the present. I live exclusively from my artistic activity but with this tightrope walk I take care that if I fall, then I should fall in the direction of lasting value and quality.

I create work cycles that are mostly based on a thematic or technical innovation and consist of 12 to 20 pictures. I discuss current problems in the world, such as pollution, genetic engineering manipulations, aging society, excessive consumption etc. I am on a kind of time travel and I create a discourse between varying epochs in my pictures. On the one hand I want to show how habits, moral norms and social graces change over time. Paintings from the Renaissance to the Baroque are re-mixed with contemporary lifestyles to underline the contrasts between the different eras. I use historical portraits and position the figures in a new contemporary context. On the other hand, my goal is to analyze the meaning of the terms art, artist and artwork, as well as the relationships between them in different epochs and to update these terms for our times from the synthesis of divergent past views.